Well, odd plays do happen. Check out this one from the Cubs game last night.

Let’s recap what happened. With runners on second (R2) and third (R3) the batter attempts a squeeze. He misses hanging R3 out to dry. In the rundown, R2 comes over and takes 3B. As R3 is returning to 3B, he overruns the base and goes into foul territory.

The Cubs catcher tags both guys (original guy from 2nd now on 3rd along with the guy now behind the base). Umpire signals 2 outs. Umpires then huddle and rule R3 out and lets R2 stay on 3rd. The Cubs continued arguments for two outs was denied.

The big question – did they get it right. I think they nailed it.

Lots of moving parts on this one. Let’s break them down one at a time.

Should Murphy (R2) have been out for passing Tejada (R3)?

(h) He passes a preceding runner before such runner is out;

It does not matter who does the passing (in other words the runner ahead can run behind and still cause an out). It certainly looks like Murphy got ahead of Tejada, so he should be out, right?

Turns out the answer is no.

The Rules and Interpretation Manual from the Wendelstedt school has the following illustrations:

The Mets play is similar to the “not passing” image 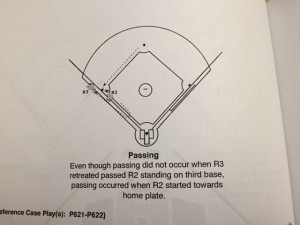 If the guy on 3rd, heads home, then you have passing

(Side note, all serious rules students should buy the Wendelstedt manual. It is not available in the online store right now, so watch for when it is being released again. It is absolutely money well spent)

Although not stated in the rules, the interpretation is that a runner is out if passing “along the baseline”. When Tejada passed 3B, he did so in foul territory (not in the baseline), so Murphy never passed him. If Tejada made a step towards second or Murphy headed home, we would have passed him and been ruled out. None of these happened.

Shouldn’t Murphy have been out since he was tagged and 3B did not belong to him at the time?

7.03
(a) Two runners may not occupy a base, but if, while the ball is alive, two runners are touching a base, the following runner shall be out when tagged and the preceding runner is entitled to the base, unless Rule 7.03(b) applies.

The people who want an out for this are missing the key point. Look at the phrase I bolded in the rule. There was never a point where Murphy was tagged when both men were touching the base. As long as both were not touching a base at the same time, it does not matter who technically has right to that base.

OK, I buy that Murphy is not out for these two reasons, then why was Tejada called out?

I can answer this question 2 ways – a very simple way and a very technical way.

(c) He is tagged, when the ball is alive, while off his base. EXCEPTION: A batter- runner cannot be tagged out after overrunning or oversliding first base if he returns immediately to the base;

In the most basic way to think about this, Tejada was tagged with the ball while not on a base. He is out.

The more complex way to get an out is through abandonment and Rule 7.08(a)(2):

(2) after touching first base, he leaves the base path, obviously abandoning his effort to touch the next base;

Tejada thought he was out and took steps away from the base path abandoning his efforts to run. He is out.

From Twitter, this is what the umpires ultimately ruled.

Pool reporter on play at 3B. #mets #cubs pic.twitter.com/bn8Rf4Qg6D

I think the explanation is fine although the umpire mentions a couple of times that it was Murphy’s bag once Tejada was out. While correct, this point does not matter since they were never tagged while both being on the base.

I seriously think they could have ruled Tejada out for simply being tagged while off the base. This makes things pretty cut and dried as well. Nothing else on the play puts Murphy out so the result is the same.

In the end, the only thing the umpire could have done better was not signal two outs when the play happened in real time. Give the umpire credit though, he immediately calls time and kept Murphy on the base. He knew the play had to be hashed out and did not want the extra complication of a guy mistakenly coming off the base due to an umpire call. Overall a great interpretation of the rules and call.

The rules get tricky at times. This is why we wrote RuleGraphics. It is a new way to visualize and learn rules. All the key points of a rule are covered on one page. The pages are laid out in a simple fashion making finding things a breeze. Find out more at our website.

Abandoning base paths is on page 53. Passing a runner is on page 50. Finally, two players occupying one base is on page 49.

The great thing about baseball is that there is something new to see every night.